Sonic + AT&T fiber - anyone having success?

by bmah
Thanks @jonathan.yuen, much appreciated!

by jondemshar
Wow, good thing Sonic doesn't cap usage... AT&T offers gigabit fiber but with a 1TB/mo cap. WHAT?! I understand the average user doesn't download all that much, but if you have a family that likes to watch Netflix and uses iCloud to backup their devices, it would not be that hard to blow through that cap. I'd hate to see what the overage charges look like.

Even conservatively, at 800mbps, you could burn through a terabyte in less than three hours. Years ago when I had Comcast at "only" 100mbps I had to be mindful of the 1TB soft cap.

God I love Sonic. I'm grateful fiber came to the SF Sunset as fast as it did, and I tell everyone how great it is for basically the same price as Comcast and none of the shame. 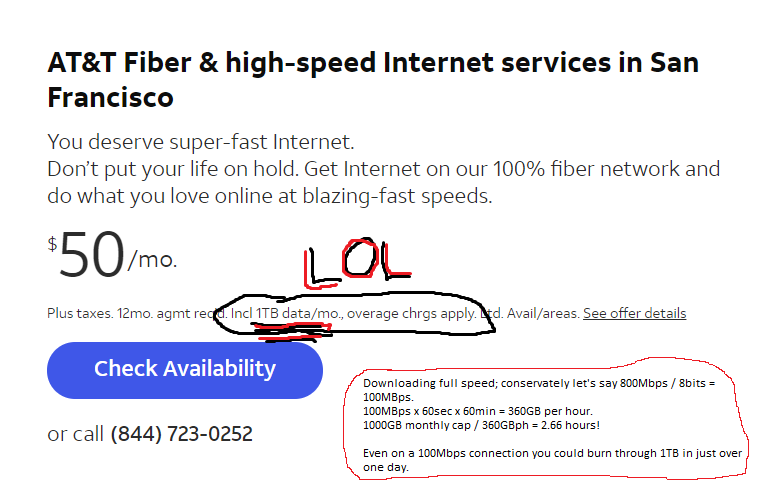 edit: ugh, yes I made a spelling error in that graphic. shame.

by bmah
Quick update: AT&T was a no-show yesterday although with the weather I kinda give them a pass. Sonic scheduled me a new install date for next week, we’ll see how that goes. One of my coworkers also has an fiber install next week so we’ll have a couple data points in theory.

by stevenkasapi
Reading through this forum, I decided to give Sonic another try at installing fiber.

I'll post an update once it's done and I've tried the service for a while.

Thanks everyone for your input.

by bmah
An AT&T installer came out today, we got everything basically working.

There are some issues with my new ATA being associated with the wrong phone number, I'm working that through with sonic.net support. This is expected to sort itself out as my upgrade (from FTTN) workflow finishes. Thanks to whomever I talked to at sonic.net (sorry I forgot your name) who was helping me troubleshoot this, I appreciate your creativity, patience, and persistence.

The best speedtest.net results I have seen so far are a little over 500Mbps (both up and down) through various combinations of: 1) wired vs. wireless, 2) attached to their modem vs. going through my pfSense box, 3) my macOS laptop vs. my macOS desktop. I haven't particularly tried to optimize performance yet...I'm mostly trying to get routing and services shifted over from my Comcast connection. (First we get correctness, then we worry about performance.)

So far so good, although I expect to be tweaking this through the weekend.

by stevenkasapi
Hi Everyone, thanks for your helpful responses.

I signed up with Sonic again for the AT&T-provided service. I live in the middle of SF and AT&T had run fiber in the overhead lines, so the installer had to call a guy in a motorized bucket to get the fiber installed. For some reason he hadn't planned for this, but by the end of the day they got it done.

TLDR version - everything is working great, speeds are pretty much 1 GB/s in both directions. It's only been 2 days but so far so good. I'm almost finished watching everything on Netflix and 100x speed.

Longer version - the fiber on the street is heavily armored and the installers can treat it pretty roughly, which is good, In my case meant they could throw it over an overgrown tree and hook it onto the side of my house before stringing it through a hole in the wall of my garage. The actual fiber strand is very delicate, so they install it inside where it's somewhat protected. The fiber goes to a small box that converts the optical signal to an electrical signal, and that goes to the (AT&T supplied) router via a Cat 5 or 6 cable. You need a straight shot of Cat 5 or 6 (both support GB bandwidth - in my case I've got Cat 5 and it worked fine) from the optical line terminal (OLT) to wherever you want to put the router. This is something to think about - some combination of fiber and Cat 5/6 needs to get to your router.

As another poster mentioned, AT&T supplies their own router. You need to use the AT&T router, but they give you all the passwords to configure it. Since I already had a router and a wireless setup (soaked in blood and tears to get around years of struggling with super-dense SF radio noise...) I turned off the WiFi on the AT&T router and configured it for IP passthrough to my existing router, which is actually the only thing plugged into the AT&T router.

I'm happy so far and am looking forward to being a Sonic customer.

by rmd6502
I had a good experience with the AT&T tech, but my upstream internet is not working at all. I can't send more than maybe 100k before the connection drops. I've tried from multiple incoming locations, so I doubt it's where I'm connecting from. Haven't gotten a single response to any of my requests on the forums, will need to call support after the holidays to get it figured out.

by gtwrek
Anyone here migrate from AT&T fiber to Sonic (over AT&T fiber)? Just wondering if there's any more or less pain in that process. In theory, this shouldn't need a truck roll, as I already have fiber working at my house with all the necessary equipment. All the changes are on the other end of the line.

I'm pretty sure I did similar ~20 years ago when I first became a Sonic customer from AT&T (then Pacbell) DSL -> Sonic DSL. As I recall is was fairly painless then. Hoping it would be as painless now.

by bcherry
I just got Sonic-over-ATT installed here in the SF Excelsior, the results are great. I was a Fusion DSL customer a long time ago, but had to leave Sonic when I moved to this neighborhood due to CO placement. I've been on Monkeybrains for a few years which is great and super cheap, but the speeds were lackluster.

The install went smoothly. It was raining but the techs had no problem pulling the fiber across the street and into my garage. They did a really professional install with the ONT mounted to the garage wall right next to my existing Monkeybrains POE and my root Google WiFi node. I turned off wifi and put the ATT router (ARRIS BGW210-700) into passthrough mode so Google WiFi can take over (it's set up with ethernet backhaul) and all is well, total downtime of less than 5 minutes. I'm getting wifi speeds throughout my house of 200-500Mbps symmetrical. I haven't set up the provided VOIP phone service yet.

Does anyone know if it's possible to purchase a compatible router to eliminate the monthly equipment rental fee? On DSL this was possible but discouraged, is it still possible with this new configuration?
All times are UTC-07:00
Page 2 of 3
Powered by phpBB® Forum Software © phpBB Limited
https://www.phpbb.com/