by Chris » Fri Feb 03, 2012 12:03 pm
Quote
I wanted to mention my recent experience with Sonic Fusion and see if others have had similar issues. I had my service switched over to fusion service yesterday and everything went smooth, up to a point. Sonic was excellent at switching the phone and DSL over from what I was having before, which was Speakeasy and AT&T. However I'm surprised at how low my speeds are, at least download speeds, from what I was expecting.

Currently I get 4Mbps down and 1.04 Mbps up, @ 7000 feet from the central office. This seems pretty low to me, after having researched online and seeing the graph that was posted elsewhere in this forum on expected speeds. I have The Actiontec GT701D modem. When I was figuring out how to set this up, I saw others mentioning to set the modem up for MMode, rather than ADSL2+ mode, to get the highest speed.

My previous service through Speakeasy was running up to the 3Mbps limit that was set for me. I've been told also that my lines are pretty good, so I was wondering if others have any tips for increasing speed through settings possibly? I feel like there's more to gain....

I called support and someone there did a few things which initially speeded things up and then it went down again to 4Mbps. I was told that possibly things get tuned for the next week, but does anyone have any other ideas? Thanks!

by Chris » Fri Feb 03, 2012 5:24 pm
Quote
So far no issues with dropping sync. Anyone with 7000 feet from the central office want to chime in and say their average speeds? I'd be really curious!

Dane Jasper
CEO
Sonic
by peterdmar » Sun Feb 05, 2012 11:16 pm
Quote
When we switch from AT&T to sonic.net single line Fusion ADSL 2+ Service our sync speed was at about 7mbps downstream and 1 mbps upstream under fast mode. We made that switch about 15 months ago. Our local loop length from the CO is 7800 feet although most of it is relatively new copper because of utility undergrounding recently in our neighborhood. I was able to bump my downstream sync speed up to 12 mbps by running a dedicated CAT 5e cable from the MPOE to directly to my DSL modem. I've also use one of the DSL filter to filter all of the phones in the house at the MPOE. I've also had support at sonic.net set SN ratio to 6.5 and to interleave. Our service has been relatively stable since. And according to speed tests at speakeasy.com, the net downstream speed can vary between 10 mbps to 10.6 mbps and upstream speed is little better than 1 mbps.

When we started out using the service at sonic.net the DSL modem that we were using was the Motorola 2210. That hot running modem failed five months later which I replaced with the exact same modem that you using purchase at Amazon.com. With this new ActionTec modem, I had mine set to MMode mode and then set to full bridge mode connected to my Netgear WNR 3500l router. Using this mode precludes the ability to access the web interface to check on line speed and line statistics. Only way is to use reset to revert back to the original state.

I think Peter it was a post of yours somewhere that inspired me to get the ActionTec modem! I guess I'll talk to customer service and maybe reference this post. I am wondering if there is a way to test my line quality - if indeed there is something wrong with the internal wiring, it is going to be a hassle to get my landlord to give me access to the phone area of the place I live in.

When I was initially figuring out the ActionTec, I noticed that it said something around the area of 4Mbps possible down in the statistics screen after only about a couple of minutes on. Everything with upload/download speeds has been extremely consistent, and since I have a decent upload speed, the possibility of higher download speeds through tweaking seem possible to me.

Thanks again. Oh, and its pretty cool when the CEO of the company writes you back!

by dane » Mon Feb 06, 2012 11:40 am
Quote
Based upon stats for all current customers on the Fusion platform, attached is the plot of average sync speed over distance. This data is current as of last week. Sorry that it's showing with scroll bars here, that's odd. 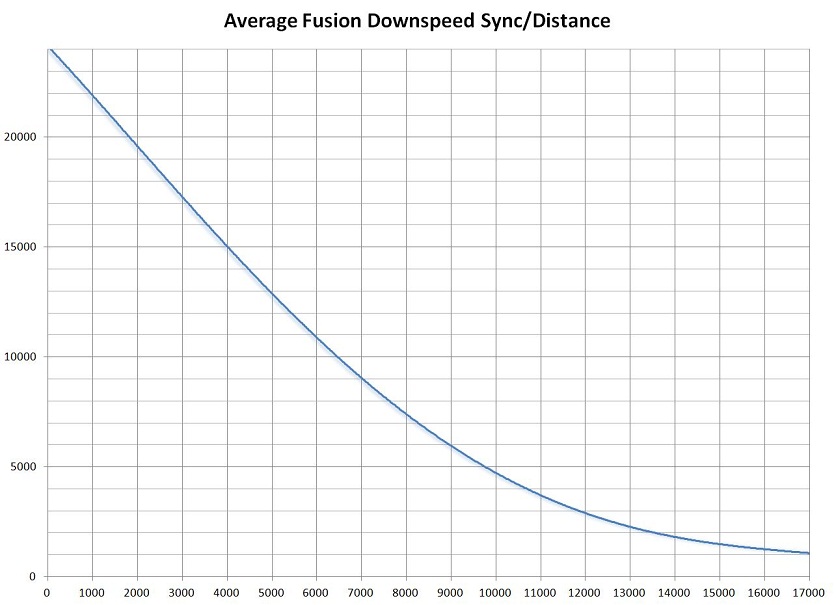 Dane Jasper
CEO
Sonic
by c.aynesworth » Mon Feb 06, 2012 12:25 pm
Quote
Thanks Dane. I got a very quick response from your support and it appears they are tweaking some things. Supposedly I was getting 4.5Mbps down, but in fact now my speed is less, around 3.6 now, rather than the consistent 4.03 I was getting. Very strange, but I thank you again for your customer service!

Dane Jasper
CEO
Sonic
by c.aynesworth » Mon Feb 06, 2012 5:10 pm
Quote
Well I just got off the phone with support. We tried several tests: sync speed in my apartment vs. sync speed at the MPOE. But they were about the same. Then I unplugged my line up to the apartment where you guys then ran a line test. Everything in all cases seemed OK. So in the end, there appears to be nothing to be done, every though all of your tests show that there are no problems at all. Very strange, as I'm getting less than HALF what I should be getting, from your very own graph. Not too happy about that.